The world of liqour can be quite a confusing place, what with all the different types of brews out there. A simple example is the whiskey department. Thankfully though, there are only 3 types of whiskey, scotch, bourbon, and rye – and their subsets.

When it comes to cigar and whiskey pairings, bourbon and cigars go quite well together.

Bourbon is an American whiskey that traces its roots from the 18th century. For a whiskey to be called bourbon, it must be distilled from a mash whose grain content must be at least 51% corn. The mixture must be distilled in charred oak containers and no additives may be added (by law actually). Bourbon is so popular it makes up two-thirds of U.S exports of distilled spirits. 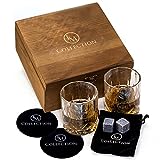 To truly appreciate bourbon (and bourbon and cigar pairings), it’s important to get to know its differences from the other 2 whiskeys – scotch and rye.

The Differences Between, Bourbon, Scotch, and Rye

For a spirit to be called scotch it must be made from malted Barley. In fact, many scotches use nothing more than barley, water, and yeast. The inclusion of whole grains of other cereals as well as caramel coloring is permitted. What is not allowed in the distillation process though is the adding of fermentation additives. The distillation must be as natural as possible and must take no less than 3 years.

The spirit must also be aged in oak casks for no less than three years and must be produced in exclusively in Scotland, from where it gets its name.

Scotch is a fresh and fruity flavored spirit and as such, if you are to pair it with a cigar, go for sweet, mild Maduro such as the Ashton Maduro.

Born in Canada, Rye is any spirit distilled with, you guessed it – rye mash. As for the composition, it is up to the distiller so long as it has some rye in it (most distillers in the U.S stick to using no less than 51% though). Tricky business if you ask me. Like bourbon, rye must be distilled in charred oak barrels for no less than 2 years.

Because of its spicier nature, rye is better suited with equally spicy cigars, with the Rocky Patel 55 Robusto being a good choice of pairing.

In fact, just as Romeo and Juliet love for each other was so strong they stuck together even in death, the love story of bourbon and cigar has taken it to another level – they burn together. That’s right. I’m talking about bourbon flavored cigars. What can beat sweet oak and vanilla in the powerful embrace of a Dominican long filler with a creamy Ecuadorian Sumatra binder and shade-grown Ecuadorian Connecticut wrapper? Come on, don’t tell you that doesn’t make you “goose-bumpy all over”.

Bourbon Cigars – The Making of a Love Story

The cigar is a perfect amalgamation of Ecuadorian Sumatra wrapper, Connecticut binder, and Dominican long fillers. As for the infusion of the bourbon, you’ll be surprised to know that the bourbon doesn’t touch the cigar at all. The bourbon is infused into the cigar by slowly evaporating it in during the seasoning process. The finished product is then housed in a glass tube that's sealed with wax. All the humidity is sealed in and you won’t need a humidifier to keep it fresh. Now that’s convenience.

The result is an amazing cigar with a hint of bourbon.

When it comes to flavoring your favorite cigar with your favorite alcohol pairing, the question is always asked, “can I dip my cigar in bourbon?” People like dipping the tip of their cigar in their drink but this is not an advisable thing to do. Remember, a cigar can easily be ruined by too much moisture. You can ruin, your premium cigar by dipping it. My advice will be for you to get a bourbon-infused cigar. The Maker’s Mark 650 is an excellent choice.

Bourbon and Cigars – Go for It

Nothing to wait for here, the verdict is out. A good bourbon and a good cigar make the perfect pairing.